Wow. What an incredible year 2014 has been for the Coalition. We grew from one chapter in Washington, DC to three, having launched chapters in Ottawa and New York City. We welcomed a Deputy Foreign Minister, senior government advisers, as well as dozens more diplomats driving innovation from within government and key private sector individuals integrating outside technologies and expertise into the public sector. 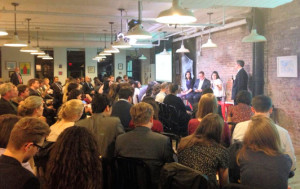 We partnered with leading international affairs organizations, think tanks, governments, and universities from the UN Foundation to Georgetown University, Brookings Institution to the Meridian International Center, and many more. We garnered insights from many of the tech companies who have redefined how the public consumes media including Facebook, Buzzfeed, Tumblr, Instagram and Google.

Most importantly, we sought to reach out to you, our community.The Coalition engaged with thousands of individuals in person and online around the globe.

We’re excited about our future. 2015 will be a year of more growth, unique events and further partnerships – including joining our friends at Fosterly for Collaborate DC. Collaborate will be held in January and brings together innovators in entrepreneurship, government, and technology. We will be there to highlight tech’s ongoing impact on diplomacy.

2015 is going to be great! Join us in-person in DC, Ottawa, or NYC, and follow us on Twitter @DigiDiplomats. Interested in partnering with us for a future event or launching a chapter in your local community? Shoot us an email.